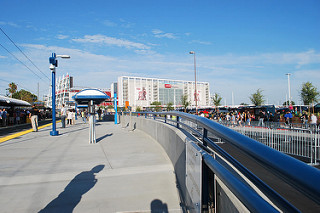 Which Bay Area Communities Are Growing the Fastest?

Plentiful jobs continue to bring highly paid workers from across the globe to the Bay Area, which will likely translate to more strong demand for housing for the foreseeable future. And three Silicon Valley communities are doing particularly well when it comes to attracting employees and keeping the economy firing on all cylinders.

A recent analysis by WalletHub ranks more than 500 large, midsize, and small U.S. cities for the best growth between 2009 and 2015, measured equally by population gains and economic expansion. The study uses 14 smaller criteria to develop its growth rankings, including household-income, job, and gross-domestic-product growth; an increase in the amount of startups, businesses, and venture-capital investment; and median home price appreciation.

While Texas dominated the list of the 20 fastest-growing communities in the country, three Bay Area cities cracked WalletHub’s overall top 30 list: Santa Clara (No. 22), Redwood City (No. 24), and Milpitas (No. 25). Both Milpitas and Santa Clara rank among the 10 fastest growing U.S. places in terms of overall economic conditions.

Redwood City tied five other communities — four in Texas and one in Indiana — for biggest household income gains. Milpitas ranks as the third best U.S. city for job growth and along with Redwood City landed in the top 10 for fastest-growing small cities, defined here as those with fewer than 100,000 residents.

Among large cities, those with 300,000-plus residents, San Jose ranks as the No. 8 fastest-growing place in the country. As Pacific Union Vice President of Business Intelligence and Chief Economist Selma Hepp noted in a recent analysis, the San Jose metro area led the country for economic growth in 2015, with the GDP seeing an 8.9 percent increase. That GDP growth was also evident in WalletHub’s study, with four Bay Area communities — San Jose, Sunnyvale, Santa Clara, and Mountain View — tied for the biggest such gains in the nation, along with cities in Texas and Ohio.

And since no discussion of the Bay Area’s economy and housing market would be complete without at least a mention of San Francisco, the City by the Bay didn’t manage to crack the top 100 on WalletHub’s overall list. For large cities, San Francisco ranks as the 15th fastest growing, behind a couple of decidedly less glamorous Golden State cities: Bakersfield (No. 2) and Riverside (No. 9).