What Does the “Shift” in the Housing Market Really Mean?

Gary Keller, co-founder of Keller Williams, noted last week that he is concerned that the U.S. housing market may be shifting by pointing to the following market indicators: “Days on the market are up, the supply of move-up and higher end housing is now growing, home prices are going down in some markets, unit sales are slowing and construction is flat.”

However, Keller’s comments need nuance. It is very dangerous to make broad statements about the national housing market. If anything has become even more evident during the current recovery, it is that regional housing markets are highly different, and what happens in one market may have absolutely no bearing on others.

For example, while the Bay Area housing market is in its fourth year of growth, some other markets have just recently started to rebound. Two of the hottest U.S. markets right now are Denver and Portland. The growth in these two markets is primarily driven by an influx of population from other more expensive areas like the Bay Area; job growth, particularly in the tech sector; and slim inventory levels. Other markets such as Houston have seen the impact of oil-price drops permeate job markets and consequently housing markets.

So let’s break down the numbers. The fact that home prices are dropping in some markets has very little impact on others. According to the National Association of Realtors, the markets that posted a median sales price decline in the second quarter are primarily located in the Northeast and the Rust Belt — where cities have been losing population for decades — as well as areas affected by the decline in oil-related jobs such as Houston. Atlantic City, which had the largest home price decline in the U.S., has also been on a losing streak for years now, and the collapsed gaming industry certainly didn’t help its situation. Employment in Atlantic City peaked in July 2006, and the area has since lost about 20,000 jobs.

The picture in the Bay Area is a little different. Bay Area markets have showed slowing price appreciation growth, but not price declines. According to our most recent MLS data analysis, home price appreciation has generally declined from double-digit-percentage points to single-digit annual appreciation, with most regions still growing at more than 5 percent annually. So prices are still growing but not as aggressively as in recent years. This is a welcome breather for the market, as many analysts worried about a Bay Area housing bubble.

The other housing market measure noted by Keller was days on market. As noted in our analysis, the Bay Area is experiencing a slowdown in home sales but not uniformly across price ranges or regions. San Francisco is the only Bay Area county with a consistent slowdown across price ranges. The surrounding, more affordable regions are still showing strong market conditions. The increase in days on market is most notable in San Francisco, Marin, and Santa Clara counties.

Homes in San Mateo, Alameda, and Contra Costa counties, however, are barely lasting longer on market in the more affordable ranges. Sonoma and Napa counties are also not seeing any changes, and if anything, homes in Napa County are selling faster. All in all, the days-on-market metric is not showing a uniform trend in one direction or the other.

Additionally, according to data from the California Association of Realtors, which allows for a longer-range perspective, single-family homes in San Francisco County averaged 32 days on the market for over the last 15 years. As of May 2016, homes were on the market for 21 days. Hence, homes are still selling quicker than the longer-term average. 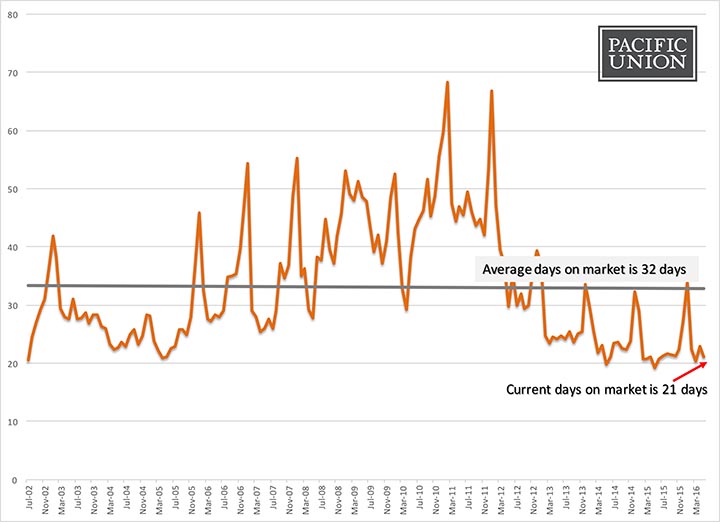 However, for medium- to high-priced homes, the increase barely translates to notable inventory additions. Figure 2 illustrates the unsold inventory index (UII), which measures the absorption of inventory at the current rate of sales. In a balanced market, the UII averages six months. Currently, all Bay Area counties are well below the six-month mark for properties priced at $1 million and higher. In fact, all areas with demand coming from traditional buyers (not those purchasing second homes) have inventories of less than two months.

Figure 2: Unsold Inventory Index for counties in the Bay Area and homes priced above $1 million. 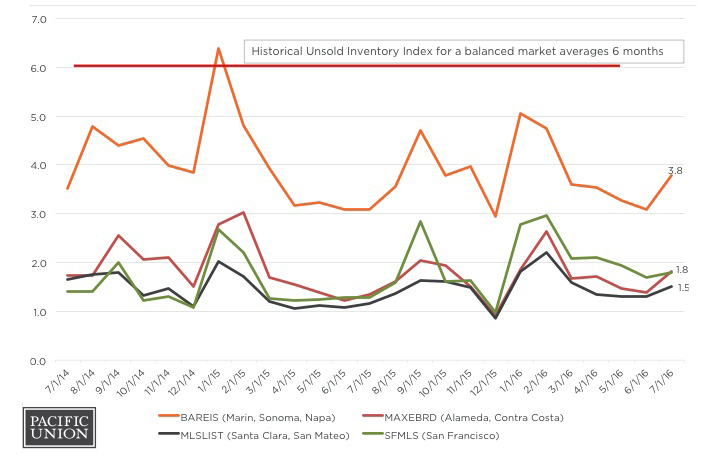 Keller also raised concerns about slowing unit sales. Again, the picture is much more nuanced. Sales of luxury homes have slowed, as have sales of homes priced less than $1 million. The sub-$1-million inventory is rapidly declining due to multiple years of double-digit-percent appreciation migrating the affordable housing stock from sub-$1-million to over $1 million across the entire region. Therefore, it is no surprise that sales have declined. For the luxury segment, it appears that geopolitical uncertainty and financial volatility have brought the market to a standstill. However, the middle-range inventory — properties priced between $1 million and $3 million — is still active. San Francisco aside, year-to-date sales (January through July) for the segment are up 4 percent. Going forward, a lack of affordable homes for sale will be the major obstacle to improving home activity.

Keller’s last concern noted a lack of new construction, which is a genuine concern in California. Generally, the state has lacked sufficient levels of new construction to keep up with population growth for more than 30 years. California added about 1.7 million new residents between 2010 and 2015 and an average of 346,000 people annually. During the same period, only 409,000 housing units were built. The math is easy, but the lack of new housing is a puzzle in need of a solution.