The Bay Area Housing Market Is Slowing, but the “Affordable” Segment Is Still Going Strong

The Bay Area housing market has indeed shifted in 2016 when compared with years before. Home sales activity has slackened and price appreciation has leveled off, but the picture is not that simple. The differences in housing markets are notable across the regions and within price categories.

In July of this year, home sales were down 21 percent overall from last July in eight of nine Bay Area counties (excluding Solano). The drop in sales is evident across all counties and price points. The only segment of the market that saw a pickup in activity from last July was luxury homes priced at $3 million and above in Contra Costa County. However, even that change was only four units more than last year.

At the regional level, Alameda and Contra Costa counties both saw drops of about 20 percent in sales activity overall from last July, the largest deceases in the Bay Area. Nevertheless, home sales in both counties peaked last June and July, and thus the drop appears more notable.

The July sales could be an anomaly and partially explained by changes in school calendars compared with last summer. In most of the region’s school districts, the first day of school is a few days earlier this August and could have prompted families to take vacations sooner, thus slowing July sales activity. At this point, it is hard to tell how much impact those couple of days had on the housing market and whether sales will rebound in August.

Nevertheless, comparing sales activity for the first seven months of this year with last year’s numbers illustrates a slightly different picture. While overall sales volume is 8 percent lower, it largely fell for homes priced below $1 million and above $3 million. Sales of homes priced between $1 million and $3 million actually increased by 4 percent.

Overall sales are lower in all Bay Area counties, but not equally across all price segments. Sales in the most affordable segment — homes priced up to $1 million — fell everywhere, but that is also a function of a lack of supply of affordable homes. Due to rapid price appreciation and absorption of the affordable segment of the market over the last few years, there is very little of that market segment left to discuss. In July, the inventory of homes priced below $1 million was 8 percent lower than last year, while the inventory of higher-priced segments rose by about 17 percent.

Changes in sales of homes priced anywhere above $1 million varied quite a bit throughout the region but were also dependent on the available inventory and price appreciation within the segments. The chart below illustrates year-to-date changes by county and price category according to MLS data. The chart clearly highlights that demand is still strong in what now appears to be the “affordable” category, meaning homes priced between $1 million and $3 million. Similarly, when looking only at July 2015 to 2016 changes in sales, that segment has shown the smallest drop in activity — 11 percent — compared with the 24 and 23 percent decline for the lowest- and highest- priced segments, respectively. 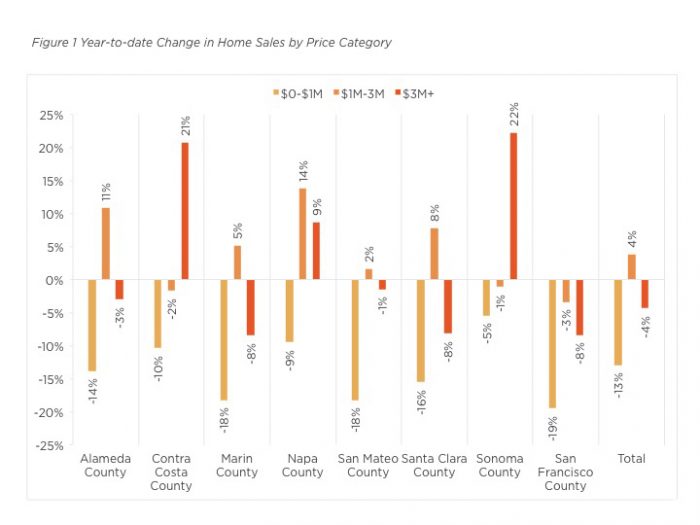 Other market indicators further suggest that the Bay Area housing market has reached a normalization level compared with previous years, though again San Francisco is showing the most notable slowdown. Figure 2 shows the change in the median number of days on the market. The luxury home segment is showing the largest changes from last July, but also keep in mind that the areas with the biggest drops — Alameda and Napa counties — have relatively fewer luxury sales. In San Francisco and Santa Clara counties, where luxury sales are more prominent, homes at all price segments are taking relatively longer to sell than last July. The slowdown in the luxury segment has been evident since the start of the year, as many worldwide economic and geopolitical trends have led to more caution among high-end buyers. 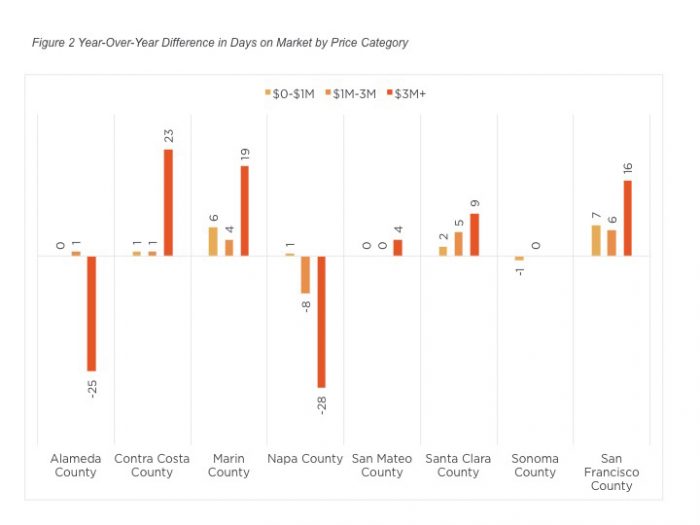 Alameda County is a bit of anomaly in this respect since only three luxury properties sold in July. Figure 3 also illustrates the change in the average premium paid (dark red line) from last July. San Francisco had the largest decrease in premium, 4 percentage points. In other words, premiums averaged almost 18 percent in July 2015 while averaging 14 percent in July of this year. It’s worth noting that all regions have seen a drop in the average premium paid for properties that sold above list price. 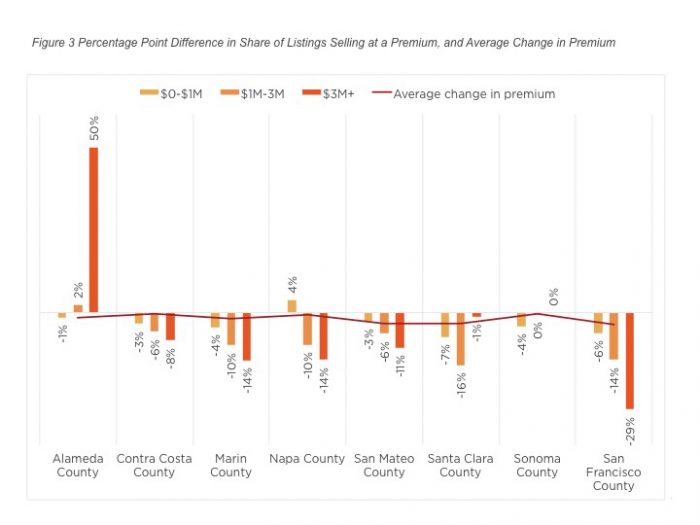 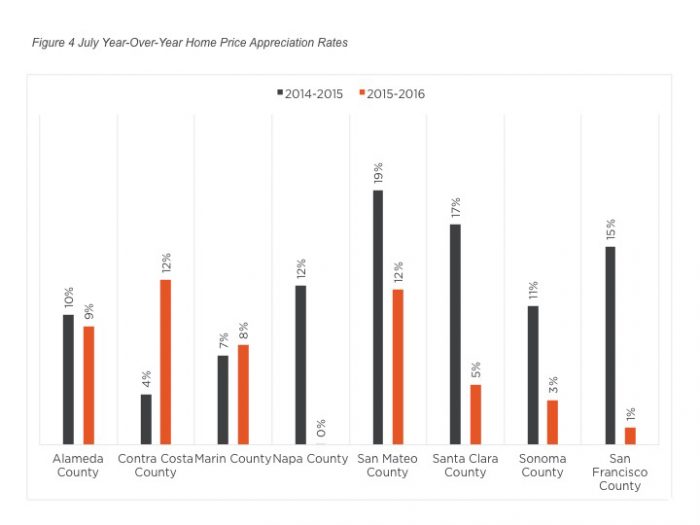 All in all, the Bay Area housing market has reached an interesting turning point. While countywide trends diverge in some aspects, it is very clear that the frenzy experienced in the last couple of years has diminished and that the playing field between buyers and sellers has leveled.

San Francisco, which led the frenzy, has most certainly cooled. Nevertheless, the normalization is welcome, as it suggests that we are in a healthier market where home price increases are more sustainable and the game no longer favors one side. It is clear that demand for Bay Area real estate is still solid and that local homebuyers are looking for more affordable options.