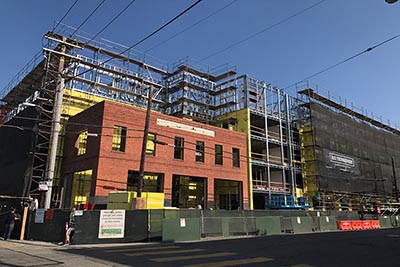 San Francisco Led the Nation for Home Building Gains in 2017

Construction cranes have become a familiar sight in San Francisco in recent years, and the city in fact ranked No. 1 the U.S. for residential building activity last year, helping to put a dent in continued inventory shortages.

That’s according to a Trulia report, which ranks 84 U.S. metropolitan areas for building-permit activity in 2017. San Francisco led the nation for the growth rate of permits issued — 94.6 percent above its historical average over the period between 1980 and 2016. In a blog post last summer, Trulia predicted that Austin, Texas, which ranked No. 2 for most permits issued last year, would see the biggest uptick in activity in 2017.

San Francisco issued a total of 6,270 permits last year, the second lowest number of the top 10 home building cities included on Trulia’s list. Of those, just 427 were for single-family homes, while 92 percent were for high-density residences, defined as those with five or more units. The company notes that cities with the largest spikes in permits are expanding housing inventory by building up rather than out.

San Jose also ranked in the top 10 for 2017 building-permit increases — welcome news for a region where job growth is outpacing housing growth by more than 7 to 1. The region posted a 43.8 percent gain in issued permits last year when compared with the average over the previous 36 years. In total, San Jose issued 8,565 permits in 2017, about one-third for single-family homes and two-thirds for high-density housing.

Oakland saw more modest growth in the number of permits issued according to supplemental Truila data, up by 16.9 percent over the historic average. The city issued a total of 10,626 permits last year, 40 percent of them for single-family residences.

For more insight into the latest new-condominium construction trends in California and elsewhere on the West Coast, check out The Mark Company’s most recent Trend Sheets, which offer insights into activity in San Francisco, Los Angeles, San Diego, and Seattle in January 2018.