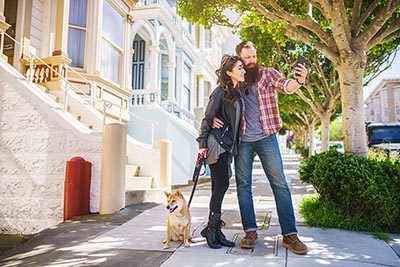 San Francisco Is the Top U.S. Housing Market for Millennials

Despite the San Francisco metropolitan area’s sky-high housing prices, millennials are flocking to the region to take advantage of a thriving job market and lively culture.

A new realtor.com report examines the top U.S. housing markets for millennials, Gen Xers, and baby boomers. The company determines the most sought-after real estate markets for each generation by crunching U.S. Census Bureau migration data between 2011 and 2015 and calculating the number of listing views on its website and the change in homeownership rates over the past two years.

By those criteria, San Francisco ranks as the No. 1 housing market for millennials. Even though the median list price in the region is $846,400, San Francisco’s plentiful tech jobs and bustling nightlife scene are big selling points for young workers. Other tech hubs also count among the top 10 destinations for millennials, including Seattle, Austin, Denver, and Washington, D.C.

While much has been written about the difficulties millennials and other first-time homebuyers face in the Bay Area, they are actually quite active in the region. In a recent analysis of Pacific Union transaction data, Chief Economist Selma Hepp found that buyers between the ages of 25 and 35 accounted for 37 percent of home purchases in San Francisco over the past six months, more than any other demographic.

Hit hard by the Great Recession and having started families, Gen Xers are mostly buying homes in more cost-effective markets away from the coasts to find more space and good schools. Five of the top housing markets for that generation are in Texas, including Dallas, Houston, and Austin. Only one of the most sought-after real estate markets for Gen Xers is foundin California: No. 5 Riverside.

Riverside appears on the list of most in-demand markets for baby boomers at No. 7 and is also the only California destination to appeal to older homebuyers. True to commonly held perceptions, baby boomers are seeking homes in the Sun Belt, which has long been popular with retirees. Six of the top 10 markets for older homebuyers are located in Florida, but Phoenix takes the top spot for best baby boomer cities.