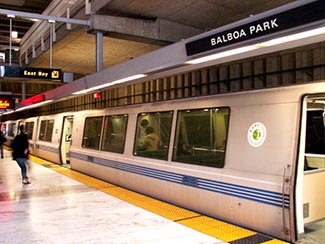 A recent poll backs up what we here in the Bay Area have long known to be true: Access to public transportation is quite important to today’s homebuyers.

That’s according to HTNB’s America THINKS “Transit Oriented Development in America” survey, which found that 55 percent of workers so value public transit that they are willing to pay a higher mortgage or larger rent payments in order to escape gridlock. An even larger number — 70 percent — of millennials said they would pay a premium for access to public transportation, compared with 60 percent of Gen Xers and 46 percent of baby boomers.

“The willingness of people to pay more to live in a particular area in exchange for enhanced lifestyle and mobility options sends a clear message about the growing interest, value and importance of transit-oriented development,” HTNB Senior Vice President Mike Sweeney said in a statement accompanying the poll results. “This fact will directly impact future decisions about the location and modes of transportation options that respond to these emerging trends.”

The survey notes that Americans’ preference to live near public transit is on the uptick, increasing among 29 percent of those polled over the past five years. Fifty-one percent of respondents think public transportation boosts a neighborhood’s appeal, and 47 percent said that access to it impacts both work and recreation decisions. An overwhelming 73 percent would back zoning and land-use regulation changes if it resulted in more public-transit options.

A reduced reliance on automobiles is the largest benefit of public transportation, cited by 57 percent of those surveyed. Forty-six percent said that public transit allows them to live, work, and play in the same area, while 44 percent pointed to its positive environmental impact.

Here in the Bay Area, two public-transportation projects will offer commuters more options and hopefully ease the region’s crushing gridlock. The initiatives will also likely influence home prices and values in the communities that they most affect.

Starting later this year the SMART train system will offer service from the Sonoma County Airport north of Santa Rosa to downtown San Rafael. A second expansion is planned north to Cloverdale and south to the Larkspur Ferry Terminal, making it easier for Sonoma County residents to commute to downtown San Francisco without ever having to get behind the wheel.

In November, South Bay voters will weigh in on the Santa Clara Valley Transportation Authority’s Envision Silicon Valley program, which would raise sales taxes to fund a $1.5 billion BART extension through Santa Clara County and into downtown San Jose. On its website, the VTA says notes that Santa Clara County is expected to add about 680,000 new residents by 2035. Job growth will outpace household growth over that period, necessitating the need for Northern Californians to commute greater distances. Currently, BART is the nation’s fifth busiest rapid-rail network in the U.S., with an average daily ridership of 360,000.