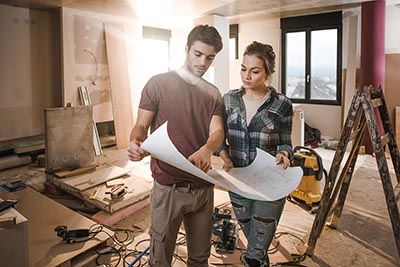 Millennials Are Now the Most Active Home Remodelers

Having either purchased lower-end homes in need of renovations or unable to move up due to tight housing inventory conditions, millennials are leading the charge when it comes to home remodeling, though they are not the biggest spenders.

Those are two of the key findings from HomeAdvisor’s 2018 TrueCost Report, which says that millennials — defined as those between the ages of 24 and 38 — have completed more home-renovation jobs than any other generation over the past year. Millennnials tackled 18 percent more remodeling jobs than Gen Xers and 42 percent more than baby boomers, a shift in trends seen in previous years’ surveys.

“Most millennials have had to compromise on the size and condition of their starter homes — with many purchasing older homes in need of repair just to be able to afford homeownership,” writes HomeAdvisor Chief Economist Brad Hunter, the study’s author. “Many of the millennials who did buy a home in the last few years are seeking to upgrade. But a lack of housing inventory, coupled with inflated home prices and rising mortgage rates, has them renovating their existing homes instead of selling and moving.”

In another reversal of prior survey results, HomeAdvisor found that bathroom remodels are now common than kitchen renovations among homeowners of all ages. Here again, millennials lead the trend and are twice as likely to complete a bathroom remodel than baby boomers.

HomeAdvisor expects that the nationwide housing inventory shortage, which is particularly severe in California and the Bay Area, will lead more homeowners to remodel rather than sell and attempt to purchase another property. More than 80 percent of those surveyed have no plans to list their homes over the next year, and half of them are considering upgrading their current residences. Homeowners of all generations say that they plan to spend as much or more on improvements in the coming year as they did in the past 12 months, led by millennials at 82 percent.

Finally, the anticipation of rising mortgage rates will likely cause more homeowners to stay put and improve their current homes than buy another one over the next few years, Hunter predicts. Yesterday, the Federal Reserve raised interest rates by one-quarter of a point, and as the Los Angeles Times reports, two more increases are expected for this year.