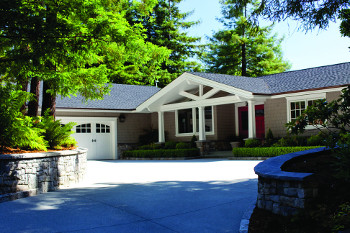 A home in Marin County, where the median sales price surpassed its prerecession peak in September.

Home prices rose about 30 percent year over year in both Napa and Marin counties last month, with prices in the latter region surpassing prerecession highs, say statistics from the California Association of Realtors.

Marin and Napa counties also put up the largest home price gains in the Bay Area from August to September — 17.8 and 17 percent, respectively.

The gains reversed numbers recorded in August, when Marin and Napa counties saw both annual and month-over-month home prices decrease.

Year-over-year home prices also grew in all seven other Bay Area counties, ranging from 18.3 percent in San Mateo to 5.5 percent in Alameda. San Mateo was the only California county besides Marin where September’s median sales price was above the $1 million mark. San Francisco ($950,340) and Santa Clara ($850,000) counties had the state’s third and fourth most expensive home prices.

CAR’s report, which also tracks inventory levels, shows that the amount of homes for sale across the nine-county Bay Area still decidedly favors sellers, just as it did one year ago. The months’ supply of inventory (MSI) across the region was 2.8 in September, nearly unchanged on both an annual and monthly basis.

Four Bay Area counties currently have the slimmest supply of homes for sale in California, led by San Mateo County, where the MSI was 2.0. Santa Clara County had the second smallest MSI of 2.2, followed by Alameda (2.3) and Contra Costa (2.9) counties.

Bay Area homes sold in an average of 35.5 days in September, 2.5 days quicker than they did one year ago. The Silicon Valley market is moving faster than any other region in the state; homes in San Mateo County sold in an average of 19.9 days, while those in Santa Clara County left the market in 21.1 days.