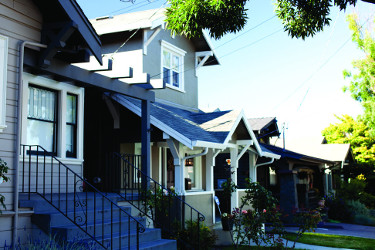 Home Sales, Inventory, and Prices All Rising in Oakland

Homes in Rockridge, long considered one of Oakland’s most desirable neighborhoods.

Oakland was one of just three U.S. metropolitan areas where the number of homes sold in May increased on a yearly basis, a recent report shows. Meanwhile, both annual inventory and home price gains in the region are outstripping the national average.

According to Redfin’s most recent Real-Time Price Tracker report, 2,538 Oakland homes sold in May, representing a year-over-year increase of 12.2 percent and the biggest gain of the 29 metro areas included in the study. Across the country, home sales shrank by 10 percent on an annual basis during that same time period.

And in what will come as some relief to beleaguered East Bay home hunters contending with a pronounced lack of inventory, the number of Oakland homes on the market was up solidly on both a monthly and yearly basis.

In May there were 6,266 Oakland homes for sale, a year-over-year increase of 14 percent and nearly 5 percent higher than the average annual gains recorded across the country. Improving inventory conditions in markets with a slim housing stock could play a key role in establishing stability, according to Redfin Chief Economist Nela Richardson.

“Metros that are reversing these trends, with rebounding job growth and inventory increases, will see the resurgence of traditional buyers necessary for stable housing markets,” Richardson said in a statement.

However, rising inventory didn’t cool home price growth in Oakland. The median sales price in the region climbed to $565,000, a gain of about 10 percent from May 2013 and slightly higher than the country’s annual average appreciation rate. Oakland’s median home price is now the fourth highest in the U.S. but still trails two of its neighbors on the other side of the Bay.

Redfin pegs the median price in San Francisco at $920,000 — the highest in the country – followed by San Jose at $750,000. Prices in both regions were up on an annual basis, though San Jose was the only area included in the report where prices slipped from April to May.