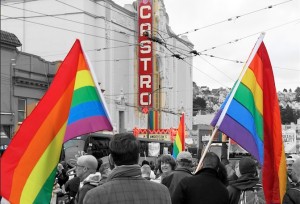 Home prices are higher and grow faster in neighborhoods with large concentrations of gay and lesbian couples, according to researchers at Trulia.com.

In a nod to the upcoming gay and lesbian pride celebrations in San Francisco and across the nation, Trulia combined U.S. census and local real estate data to examine price differences between gay and lesbian neighborhoods, measured by ZIP codes, and their surrounding communities. Results from 2015 were then compared with similar data from 2012.

Researchers found that home prices in neighborhoods where gay couples live rose 23 percent, on average, over the past three years. Prices in lesbian neighborhoods rose 18 percent.

Price increases were even more dramatic in the Bay Area.

Why the discrepancy in price growth? Trulia noted that the top gay neighborhoods are places where prices were already high relative to their metro areas, so they were not hit as hard during the housing crash as less-expensive neighborhoods nearby.

Also, lesbian couples are more than two times as likely to have children than gay couples. Trulia suggested that lesbians may seek up-and-coming neighborhoods with good schools to raise their children.