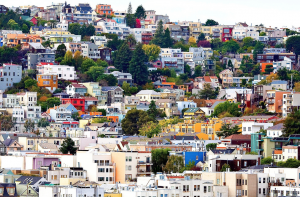 One of the reports found that the median home price in the San Francisco-Oakland-Fremont metro area spiked 38.6 percent over the past two years, while average wages rose 7.1 percent. That helps explain why many Bay Area residents, especially first-time buyers, may feel they’re being priced out of some of our regional markets.

But a separate report puts those numbers in perspective, revealing that the San Jose-Sunnyvale and San Francisco-Oakland metro areas rank first and third in the United States, respectively, for highest weekly wages. That helps make pricey homes more affordable in the Bay Area than just about anywhere else.

When looking at wages, the Bay Area is clearly the place to be. Our unrivaled mix of tech industries help make San Jose-Sunnyvale home to the highest wages in the United States — $1,868 per week, on average, or $97,136 a year, a gain of 8.3 percent over the past two years, according to data obtained from a RealtyTrac press representative.

“Home prices in many housing markets across the country found a floor in 2012 and since then have rapidly appreciated, particularly in markets attracting institutional investors, international buyers or some other flavor of cash buyer not constrained by income as much as traditional buyers,” Daren Blomquist, RealtyTrac vice president, said in a statement accompanying the home prices and wages report. “Eventually, however, those traditional buyers will need to play a bigger role in the housing market for the recovery to maintain its momentum.

“Those markets with the biggest disconnect between price growth and wage growth during the last two years are most likely to see plateauing home prices in 2015 until wages catch up,” Blomquist said.