Following a comparatively stronger November, December home sales in the Bay Area declined year over year, with largest drop-off for homes priced below $1 million. The 22 percent decline in the lowest price range dragged overall sales down 18 percent for the eight Bay Area counties in December. At the same time, homes priced between $1 million and $2 million declined by 10 percent, while those priced between $2 million and $3 million decreased by 5 percent. Only homes priced at $3-plus million saw more sales compared with last December, and those sales were predominantly located in San Francisco and San Mateo counties.

Though November to December sales activity in the Bay Area has historically increased on average by 7 percent, the decline in December 2016 sales was anticipated — particularly following the unexpected election outcome and the resulting uncertainty and increase in mortgage rates — by a general lack of affordable homes for sale. In fact, Bay Area inventory declined twice as much between November and December of 2016 than it did between those two months since 2008. The 40 percent decline in inventory was relatively consistent across all price ranges, but it was particularly notable in San Francisco and Alameda counties, where the number of homes on the market dropped by more than 50 percent. Figure 1 illustrates December’s change in sales and inventory from the month before in all eight counties. 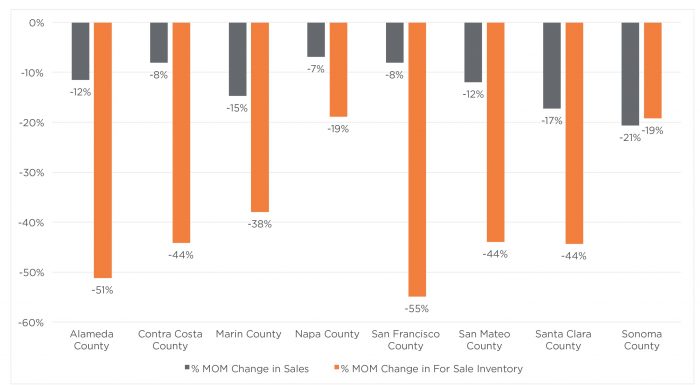 Overall, however, home sales in all of 2016 were only about 4 percent lower than in 2015. Marin County saw the largest decline, with a 7 percent drop in sales, followed by a 5 percent decline in Alameda County. The other Bay Area counties saw 3 percent to 4 percent declines in sales.

The decreases were again driven by low supply at the most affordable segment, with sales of homes priced below $1 million in 2016 declining by 8 percent from the year before. With appreciation pushing prices of many homes above $1 million, only sales of homes priced between $1 million and $2 million increased in 2016 from the year before, up by 9 percent. In addition, homes priced above $2 million were flat or saw a small decline. Nevertheless, Sonoma, Napa, and Contra Costa counties saw a relatively larger annual pickup in homes priced above $3 million. Home price appreciation was mostly powered by the lowest-priced homes, which gained more than 5 percent in value in 2016. Overall, median home price appreciation totaled 6 percent in 2016, ranging from 10 percent in Sonoma County to 4 percent in San Francisco.

Figure 2 illustrates the change in total sales and volume activity in 2016 from the year before. Rising home prices and stronger activity among higher-priced homes led to higher total volume in most counties despite fewer overall sales. Volume is defined as a multiple of homes price and sales. Napa’s total volume increased at a relatively higher rate due to more home sales among homes priced above $3 million. 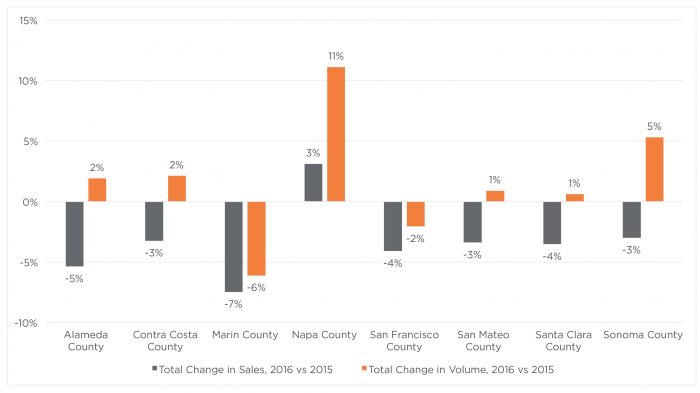 Median home prices grew the most in Sonoma County in 2016, up 10 percent from 2015 to reach $550,000. Contra Costa and Alameda counties followed, with 8 percent appreciation. Despite relatively higher appreciation rates, Sonoma and Contra Costa remained the most affordable of the eight Bay Area counties, with median prices at $550,000 and $525,000, respectively.

Figure 3 highlights median prices by county along with overall 2016 appreciation rates. For the region as a whole, home price appreciation reached 6 percent in 2016. With the highest median sales price in the region, San Francisco prices were rising at the slowest rate in 2016 and actually declined at the higher end of the market. Generally, homes priced above $3 million saw almost no appreciation in 2016. 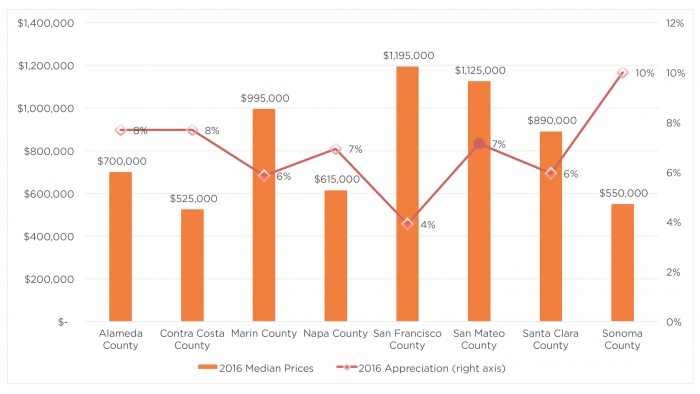 Lastly, the rebalancing between buyers and sellers and the normalizing market conditions that were seen throughout 2016 continued at the end of the year. Fewer sellers entered bidding wars and were willing to pay premiums over the asking price. While the year started with more than six of 10 homes selling over the asking price in the majority of markets, as of December, about half were selling for premiums 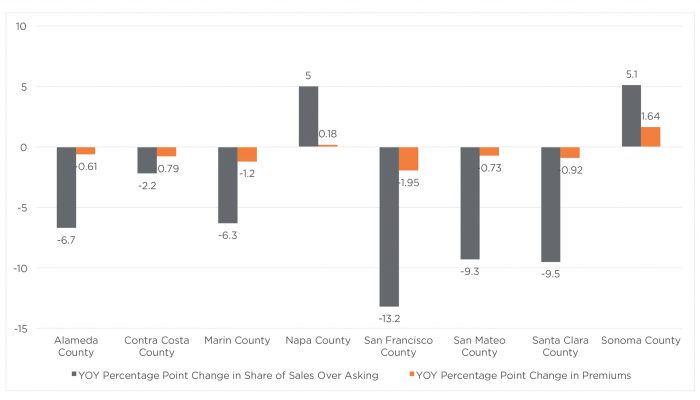 With 2016 now in the rearview mirror, what can we expect for the Bay Area housing market in 2017?

At the very least, we can say that much uncertainty still remains regarding the incoming presidential administration. However, the Bay Area’s economic and demographic fundamentals have not changed since the election and still provide the foundation for a strong housing market in 2017. Two factors that will play a determining role will be mortgage rates and inventory conditions. The region’s affordability crisis is not abating, and thus the lack of homes in lower price ranges may limit some households’ abilities to enter the market. The decline in sales of lower-priced home will thus continue into 2017, while homes priced between $1 million and $2 million will comprise the lion’s share of market activity. Also, there will be continued buyer flight to find affordable properties, and areas with more affordable homes will see an uptick in activity. Lastly, lower-priced homes will see solid demand from buyers and will appreciate relatively faster. Stay tuned for more on our outlook for 2017 in an upcoming analysis.

Selma Hepp is Pacific Union’s Chief Economist and Vice President of Business Intelligence. Her previous positions include chief economist at Trulia, senior economist for the California Association of Realtors, and economist and manager of public policy and homeownership at the National Association of Realtors. She holds a Master of Arts in Economics from the State University of New York (SUNY), Buffalo and a Ph.D. in Urban and Regional Planning and Design from the University of Maryland.