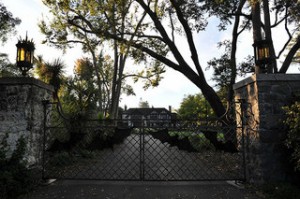 California: Home to Most of the Country’s Priciest ZIP Codes

A gated home in the San Mateo County town of Atherton, ranked as the second most expensive real estate market in the U.S.

Seventy percent of the most expensive U.S. communities in which to purchase a home are located in the Golden State, with Silicon Valley of course well represented.

Using data from real estate listings portal Property Shark, Business Insider ranked the 20 priciest ZIP codes in America based on the median home sales price between January 2014 and June 2015. Fourteen of those ZIP codes are in California, although the country’s highest-dollar real estate market is actually on Long Island.

Business Insider ranks Sagaponack, New York — in tony The Hamptons – as the most expensive place in America to buy a home, with a median sales price of $5.13 million. Four other New York ZIP codes made the top 20, including another in The Hamptons and three in Manhattan.

Besides Miami’s 33109 ZIP code, the rest of the country’s most expensive neighborhoods are situated along the California coast. Five of Silicon Valley’s most exclusive communities landed on the list, with residents earning some of the highest salaries in the U.S.

Atherton‘s 94027 ranks as the country’s second-most expensive ZIP code, with a median sales price of $5.05 million. Residents of the San Mateo County town pull in a median household income of $220,583, the third highest of any community included on the list.

Home shoppers who are lucky enough to afford a property in one of those prestigious Silicon Valley communities will call the country’s most elite and affluent tech executives neighbors. Atherton is home to Google Chairman Eric Schmidt and Hewlett-Packard CEO Meg Whitman, while Google co-founder Sergey Brin lives in nearby Los Altos Hills. In Palo Alto, where Business Insider says that home prices have doubled over the past 10 years, Facebook’s Mark Zuckerberg owns five homes and even purchased four neighboring properties in order to protect his privacy.

The other Golden State communities ranked among the nation’s priciest are all in Southern California: four in Los Angeles County, three in Orange County, and one each in Santa Barbara and San Diego counties.