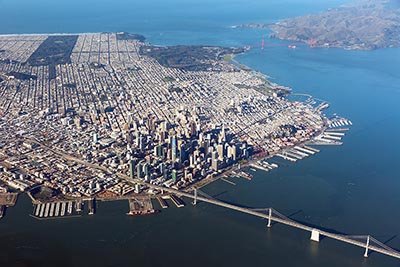 The Bay Area’s real estate market and high-performance economy are currently running at full steam and appear poised to carry that momentum over the long term.

North America accounts for half of the world’s top 30 future-proofed metro areas. Six of the top 10 future-proofed cities are in the U.S., and four of those are in California.

San Francisco takes the top spot on the rankings, followed by Silicon Valley at No. 2, both due largely to the Bay Area’s global position as a technology powerhouse. Those two Bay Area regions have the planet’s largest number of startups and have also created the most tech unicorns — private startups valued at more than $1 billion — over the past 15 years.

In Southern California, Los Angeles and San Diego rank a respective No. 6 and No. 10 on the future-proofed cities list. Jones Lang LaSalle points to Southern California’s excellent higher-education institutions, which produce plenty of highly skilled technology workers. Both cities employ more computer and mathematics workers than any other job market on the West Coast, and both rank in the top five for the most international patent applications.

So why is future-proofing an important measure of a real estate market’s potential to thrive? Investors use the metric to determine whether technology innovations will result in a market’s ability to hold its value and appreciate over time. For developers, the concept of future-proofing allows for understanding a city’s capacity for economic growth, thereby allowing them to plan and build sustainable communities.