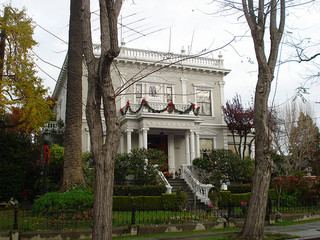 Situated on the south-central part of the island, the Gold Coast is bordered by Central and Encinal Avenues to the north, Grand Street to the east, the Alameda Lagoon to the south, and Caroline Street to the west. The neighborhood offers easy access to downtown Oakland and Interstate 880 via the Posey Tube, but residents who prefer public transportation are within walking distance of two bus lines that offer regular service to downtown San Francisco.

A more scenic way to travel to the city is via ferry, which residents can catch on the island’s west side. Ferries depart roughly every half hour during peak commute times, and the trip to the San Francisco Ferry Building takes just 20 minutes.

Gold Coast denizens are a short stroll away from Robert W. Crown Memorial State Beach, one of the East Bay’s most scenic stretches of shoreline. The park is a popular spot for windsurfing and kiteboarding or simply soaking in the epic views of the San Francisco skyline from the 2.5-mile-long beach.

Although the neighborhood is largely residential, there a few places to eat and drink within walking distance, including the 1400 Bar and Grill and Z’s Cocktail Lounge. For a more novel form of entertainment, head to the nearby Pacific Pinball Museum, which boasts a collection of more than 100 playable machines from different eras.

Gold Coast homes are situated on peaceful, tree-lined streets that highlight the small-town vibe that many Alameda residents feel is the city’s greatest strength. Many homes in the neighborhood are large and stately and are situated on appropriately generous-sized lots.

Due to its sizable homes and high desirability, the Gold Coast is currently Alameda’s most expensive neighborhood. According to MLS data, the four largest second-quarter single-family home transactions in the city – ranging from $1.9 million to $2.2 million – were all Gold Coast sales. In that same time period, the median sales price in Alameda for a single-family home was $804,000.