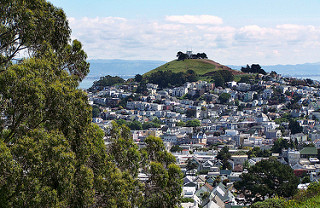 Demand for San Francisco Bay Area real estate has arguably never been more intense, as highly paid professionals flock to the region to take advantage of an excellent job market. But a look at the number of single-family home sales across the Bay Area for the first half of 2015 shows that, for the most part, units sold have been slowing for the past two years.

According to MLS data, single-family home sales dropped in six of Pacific Union’s nine Bay Area regions* in the first half of this year compared with the same period last year. When comparing this year’s first-half sales with 2013’s, the pattern becomes even more consistent, with all regions displaying a decrease in the number of homes sold. The two-year declines were largest in Western Bay Area counties, where many of the nation’s most desirable jobs are located. (Complete units-sold numbers can be found in the charts below.)

So what’s causing the drop in sales at a time when so many people want to own a home in the Bay Area? Pacific Union CEO Mark A. McLaughlin believes that three major factors are at work.

“A slim supply of homes for sale and an increase in the number of off-market sales are certainly the largest drivers of the decline in units sold as recorded by the MLS,” he says, “but fewer move-up buyers in the market also impacts sales.”

Anyone who follows Bay Area real estate is likely familiar with one of our housing market’s major challenges: fewer homes for sale than people that want to buy them. The situation hasn’t improved over the past year, with the months’ supply of inventory (MSI) for single-family homes sold being lower in June of this year than it was in June 2014 in all of the Bay Area regions in which Pacific Union operates.

An MSI between 4.0 and 6.0 months is generally considered to indicate a balanced market, with lower numbers favoring sellers and vice versa. In June, the MSI across the Bay Area ranged from 0.7 in the Mid-Peninsula region to 2.8 in Napa County, meaning that all of our markets seem to favor sellers.

In Silicon Valley and the Mid-Peninsula, where home sales have declined by double-digit percentages from the first half of 2013, a lack of inventory is a key factor slowing sales, according to David Barca, vice president of those two Pacific Union regions.

“Certainly, if there was more inventory, there would be more sales,” he says.

An Absence of Move-Up Buyers

A lack of homes for sale means that many move-up buyers are sitting on the sidelines, as they are unsure if they will be able to find a new home once they sell their current property. Barca says that in Silicon Valley, one of the nation’s most in-demand housing markets, even buyers with plenty of equity and money are staying put.

Both Pacific Union President Patrick Barber and Marin County Region President Brent Thomson cite reduced activity by move-up buyers as a contributing factor to sales declines on both sides of the Golden Gate Bridge. Barca also notes that first-time buyer activity is particularly low in expensive Silicon Valley – except for the young fortunate professionals that play important roles in local tech and social media companies. Otherwise, young first-time buyers may need to rely on parents or relatives who can assist with the down payment.

Another reason that some move-up buyers might be staying put is the impact of federal and state taxes on the seller. The tax-law changes of 2003 provide for capital-gains exemptions of up to $250,000 for single sellers and $500,000 for those who are married. Price appreciation over the past few years has been significant in the Bay Area, and the associated tax impact may give some move-up buyers enough motivation to stay in their existing home and remodel it.

McLaughlin believes that tightened credit markets could also be hindering move-up buyers, as some would not qualify for as large of a mortgage as they did when they purchased their first homes.

An Abundance of Off-Market Listings

While a multiple listing service (MLS) is still the most common way that real estate professionals market their clients’ homes, some clients may decide that the best course of action — for privacy or confidentiality reasons — is to keep the property out of the public eye. According to an analysis of sales data prepared by Pacific Union’s Menlo Park office, private transactions account for about one-third of sales in some San Mateo County enclaves, another factor contributing to the apparent decline in sales volume.

Off-market deals have likely also played a role in the slippage of home sales in San Francisco. In a 2014 report, the San Francisco Association of Realtors estimated that private transactions represented 11 percent of home sales in 2013, and Barber speculates that that number has likely since increased.

Pluses of off-market sales include protecting the seller’s privacy and avoiding the work associated with holding open houses. However, it’s important to note that SFAR found that homes not listed on the MLS in 2013 sold for an average of 17 percent less than those that were. Whether or not to make their home available to the public is a decision that sellers should carefully consider and discuss with their trusted real estate professional. 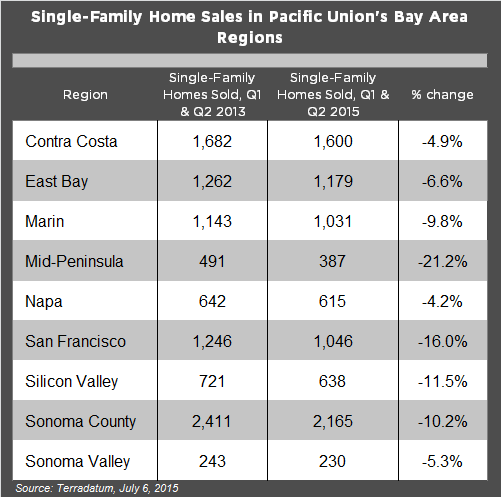 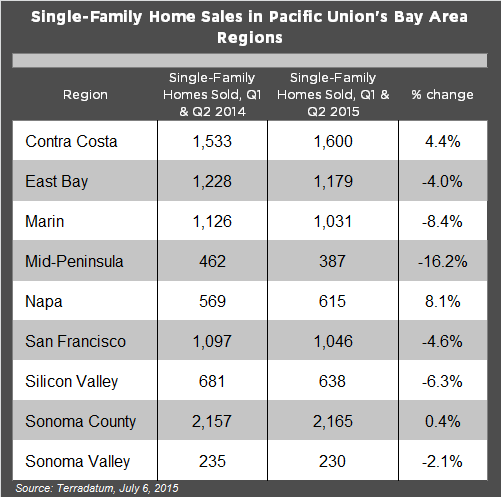 * For more information on how Pacific Union defines our individual Bay Area regions, please refer to the charts found in our Q2 2015 quarterly report.